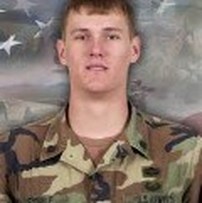 US Army Corporal Sascha Struble of Philadelphia, N.Y. was 20 years old and an Army corporal assigned to the 1st Battalion, 508th Infantry Regiment.  Corporal Struble was a paralegal who became a paratrooper and looked forward to a career in law after leaving the service.

Sascha took his dad with him when he enlisted in the Army in 2002, during his senior year in high school. After growing up hearing stories of his father, who also was in the Army, jumping out of helicopters and repelling off of cliffs, Sascha was wary of certain positions in the military. So when the recruitment counselor asked what job he wanted, Sascha pointed to his dad and said, “Whatever he didn’t do!”  That didn’t last long.  “Within the first year, he’s calling me and saying, ‘Dad, I’m going to air-assault school.’  He was so proud,” Mike Struble recalled. “I said to him, ‘You’re sure doing a lot of crazy stuff for someone who didn’t want to do crazy stuff.'”

Being in the military runs in Sascha’s family. Along with his father’s military career, his brother, 22-year-old Nick Doms, has spent a year in Iraq and now is stationed in Oklahoma. His younger brother, Michael Struble, recently signed up for the Air Force.

“I always tried really hard never to push the military on any of the kids,” Sascha’s father said. “I certainly encouraged it, but I never pushed it. Let them make their own calls, their own decisions.”

Sascha played the guitar and loved photography, often taking pictures of the places he was sent and e-mailing them to his family. He also was an avid sports fan, known for wearing basketball shorts with socks pulled up to his knees.