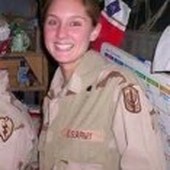 SPC Crystal Stout was 23 years old from Travelers Rest, S.C.  Chrystal was assigned to the 228th Signal Brigade of the South Carolina National Guard.  Chrystal was a 1999 graduate of Trinity Christian Academy where she played basketball as a forward on the girls’ basketball team. She also attended Greenville Technical College and was about to enter a curriculum at Liberty University when she was called to active duty. She had joined the National Guard a month prior to the events of 9-11. Chrystal had worked at banks and in the food service industry. In emails from Afghanistan, she told friends and family she looked forward to returning to hike through Europe and the Appalachian Trail. Chrystal was raised in Hillsville, and was the first woman from Western Virginia to die in the war on terrorism. She was a member of New Hope Bible Church in Greenville where she regularly volunteered. She leaves her parents, Tony Lee Stout and Julia Ann Shores a brother, Jeremiah and a sister, Sonya.

Chrystal was looking forward to her first mission “outside the wire”.  She took the place of another Soldier who was on leave.  She was responsible for installing anti-virus programs on military computers.

Sgt. Leoreen Mackey said her friend was opinionated and willing to stand up for her beliefs. “She would give you the shirt off her back if you needed it.”