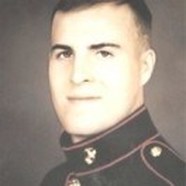 James was 26 years old from Mt. Vernon, Indiana.  He was assigned to Marine Fighter Attack Squadron 142, Marine Aircraft Group 42, 4th Marine Aircraft Wing in Marietta, Ga.  As part of Operation Enduring Freedom he was attached to Marine Light Attack Helicopter Squadron 773, Marine Aircraft Group 42, 4th Marine Aircraft Wing.  James was the last of his unit to secure ordnance at Forward Operating Base Orgun-E (Task Force Red Horse).  He had missed an earlier flight and was finally going to be heading home to Indiana.  Gunnery Sgt. Mikel Culver said his friend was looking forward to getting closer to his father and wife when he returned to the States. “There were a lot of things he wanted to do when he got back.”